Routine testing and maintenance of all hydrants on private properties, especially gated communities, is a critical component of any Fire Prevention and Safety Program.
I remember it as if it were yesterday. The evacuation order for Mountain Shadows and Waldo Canyon had gone out. As I stood staring out of my bedroom window that evening gazing out to the west, I could see what appeared to be a multitude of tiny campfires dotting the ridgeline. One by one as the fire made its way, one could see a bright flash of fire and smoke. It was the sadness of knowing that these weren’t a hoard of campers engaging in a family campout. These were individual homes, people’s most prized possessions that were being destroyed. It was at this time that I experienced just a small portion of the helplessness that those homeowners and first responders must have felt that night. What could one do but, in some cases, merely stand and watch.
Knowing that one of the associations I managed was evacuating, I wondered if anyone was left behind. With elderly and disabled residents, tenants, and household pets, did the message get to everyone? Then came the question from my wife…What worries you the most? Knowing that the homes there consisted of shake shingle roofs and cedar siding, I responded by saying “I sure hope the fire hydrants work.” Located on nearly every parcel of private land throughout the City of Colorado Springs and El Paso County is a solitary soldier who stands guard; rarely attended to, and indeed ignored by many if not most until an emergency arises. With pumper trucks limited to approximately 500 gallons of water, when a hydrant fails there is very little a fire fighter can do but stand and watch. Such was the case in the community of Security (Stratmoor Hills Water District) on June 11, 2012. With limited access, and non-functioning hydrants, fire fighters could only try and establish a protective barrier around the adjoining homes and prevent the fire from spreading. As the song goes…London’s burning and we have “NO WATER.”  That day homes were destroyed.

Having assumed managerial responsibilities of a commercial property in 2006, we soon found out just how long it had been since these hydrants had been tested (approximately 25 years had elapsed from when they were first installed). How many other private properties throughout Colorado Springs and El Paso County are in the same condition? For our client, the cost of excavating a water shut-off valve that had been buried under a six inch  layer of concrete (known as a parking lot – approximately $2300.00), and the actual replacement cost of another hydrant (approximately $1500.00) does not compare with the loss of human life. But there they stand, their little two tone uniforms (some on street corners, some in parking lots, and others in fields of grass and landscaping) waiting until they are called upon to aid in the saving of life and/or property. However for many, they will rise to the occasion and perform as they are designed. However, for others, their valves are so rusted from non-use that they cannot be opened, or sufficient water pressure has been lost such that makes the hydrant  impossible to use.
When was the last time your hydrants were inspected? “Private hydrants become the ultimate responsibility of the property owner with regards to maintenance and repair.” (Office of the Fire Marshal, Colorado Springs Fire Department, June 2008) Do you have these services performed on the private hydrants within your associations or gated communities on an annual basis? Are your hydrants properly color coded so that fire fighters are aware of just how much water, and water pressure they can expect? The American Water Works Association and the National Fire Protection Association (NFPA) recommend hydrants receive regularly scheduled maintenance and testing. Hydrant reports should be maintained and hydrants painted (based upon tested flow rates) accordingly. 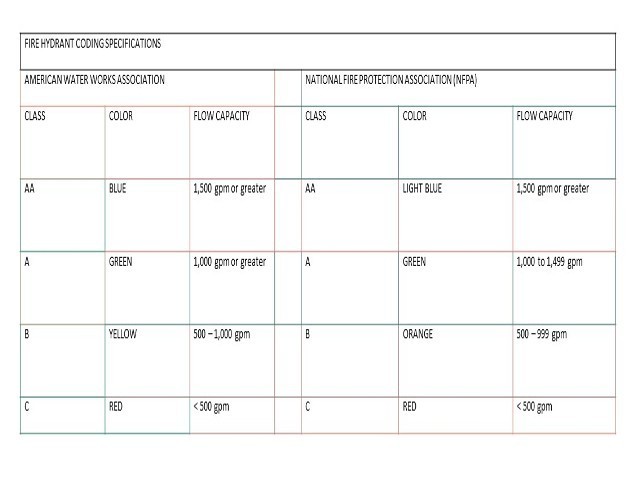